Fundraising
Today is Popcorn day - the first day that scouts can sell popcorn in our council. For the next couple weeks, scouts will be looking for new doors on which to knock and new people to help support their scouting habits. It's something I don't especially enjoy but makes it possible for boys to participate in the program.

The familiar theme from my boys is that there are too many scouts out there selling and its too much work for the funds raised. After a little family discussion last night to decide on a quota and set expectations, they are out today working together to see how much per hour they really can make. Our family decided that they would be expected to raise half of the cost of scout trips. So, if they only raise $50, they can go on $100 worth of trips.

It's a beautiful, sunny day and they had already reached 1/5 of their goal by the time they came home for lunch. As long as they can keep getting along, they should be able to finish up by Monday. One scout has historically sold to our church congregation on Sunday, so we don't do that. Two new cub scouts have started down the block, so we don't go down that way. So, they got out the town map and marked off some (hopefully) likely places and are out on their bikes now.

I don't know where you live, but in our town there are 6 troops and 6 packs - most of which sell popcorn and Christmas wreaths at this time. That makes it a challenge to figure out which neighborhoods have been covered, but not oversaturated. If there's just one troop, you can divide the place up, but we don't have cooperation between the different units. Maybe some day. Every year, I'm just sure there's a whole neighborhood someplace where no one sold anything but I've no way to tell.

If you have ideas that work for your pack or troop when selling door-to-door, I'd love to hear from you. And, if you have a really easy, sure-to-be-a-hit way to fund your scouting, please tell me all about it. :-)

Scout On
Posted: 14:15 09-30-2006 89
Court of Honor
We had 18 scouts advance in rank last night, including 8 Star scouts. The core of two patrols that started the same year have consistently advanced as a group, which is strange for our troop. Usually, individual scouts advance on their own pace, but these guys are all chugging right ahead and doing a great job growing as leaders.
I expect this next year will see some break-up of the group as the requirements and expectations for Life rank are encountered. I think it will be good to have some wait for a troop leadership position since they have lots of time to continue advancement.

This meeting was also the last one for the current leadership team. The new SPL and his team take over this week with transitions from previous leaders to new ones at each position. Then, leader training the first weekend in October and we're off and running! It's been a real good summer and the next group looks ready to keep the troop's momentum going.

I can see how countries with kings can get frustrated with the USA's 4-year term of leadership. It must be hard starting over with a new guy so often - just when he (or she) gets good at it, someone else takes over. Well, at least in Scouts, the growth and learning are more important than the efficiency and competence.

Scout On
Posted: 13:22 09-26-2006 88
Order of the Arrow Conclave
Our district had our O/A Conclave last weekend. We had 57 scouts and adults go through the Ordeal on a very windy night. My son and 2 other scouts in our troop along with one adult did the Ordeal. We also had two scouts go through the Brotherhood ceremony. I'm planning to wait and do it when my son is ready also.
If you aren't involved in it, you should find out more about the Order of the Arrow in your district. There are some good benefits to scouts and the order does make some significant impacts.
At the national level, the O/A has a NOAC (National O/A Conference) every 2 years and in 2008 there will be the huge national service project called Arrow Corps 5 - actually five separate conservation-oriented service projects on U.S. Forest Service lands across the country.
Posted: 0:37 09-20-2006 87
Scout Pizza Party 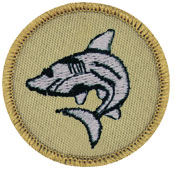 The Shark Patrol is having a pizza party this evening. Our troop has a little contest that runs for 3 months at a time. In those 3 months, whichever patrol earns the most Patrol Spirit points gets to choose the reward they want. The Sharks chose pizza - that's what everyone always chooses :-)

But, they are going to eat pizza and then go do a Patrol Good Turn - packing meals at Feed My Starving Children. It's a great organization in Minnesota and a really fun service project to get involved with.

The goal of out Patrol Spirit competition is to get patrols to bring their flag to events, participate, and do separate patrol activities. I'll post the information about it in the 'Activities' section soon.

I spent 4 days last week at Northern Tier participating in a Leave No Trace Master Educator course.  This training was a BSA National event and there were participants from Michigan, Ohio, Illinois, Minnesota, Arkansas, Texas, Florida, and Missouri.  I got to meet some people that volunteer in Boy Scouts at the national level and I learned a ton about both the BSA and O/A organizations!

The best part of the course was that I FINALLY got to visit the Boundary Waters and see what it's like up there - without the mosquitos and humidity since the weather has cooled off so much.  The training took place out in the wilderness and our trek crew was guided by Travis and Davey.  These two guys just finished their summer working at Northern Tier as Foremen for that Order of the Arrow work program that I think is so cool.  O/A members can work for a week repairing portage trails and then spend a week on a paddling trek - for a very reduced price, something like $125 for the two weeks.  There are similar programs at Philmont and SeaBase.

Anyway, Travis and Davey are amazing guys with leadership and outdoors skills beyond belief.  They've both put in lots of effort to improve their own troops and have helped lead the growth of O/A programs.  They also really live the Leave No Trace ethics when they are out with scouts and old guys like me.

Now, the challenge I have is to make use of the skills I gained. Our council has a Conservation Committee and I'm now getting involved in that. I'll be teaching LNT Trainer courses where I will teach others how to teach LNT workshops. These Trainers will in turn teach units the LNT principles and ethics. A goal we have is to have at least one LNT Trainer in each unit - that might be a new youth leadership position the troop creates or maybe the O/A Troop Rep position could take on the training duties. There are quite a few possibilities and I'm really excited to help this get going in the coming year!

Scout On!
Posted: 18:05 09-11-2006 85
LNT Master Educator Training
If you read last month, I mentioned a Leave No Trace training available next week in the Boundary Waters. Well, it looks like I'll be attending that course for 5 days. I'm really looking forward to it for a few reasons:

So, don't look for any updates to the site for the next week. But, when I get home I'll let you know all about the training.