Yet Another Eagle Project was completed this past weekend in our community. This one was interesting, useful, and fun to help with.

Our elementary school just invested in an outdoor classroom this summer, spending tens of thousands of dollars on landscaping natural seating into a bowl-shaped area of the forest on the school property. This eagle project enhanced the usability of the area by designing, building, and installing four outdoor laboratory tables. The tables will be used by students for experiments about the environment, animal life, climate, and other nature studies topics.

The design is very sturdy and should hold up for many years of changing Minnesota seasons. The tables are set on two 4x4 posts sunk into the ground over 40 inches and rest at the correct height for small children. Each table is a box with hinged lid, creating a protect work area.

I took my orders from the Eagle candidate and spent my time digging holes with a post hole digger until he told me to stop. I think I did a pretty good job!

Another eagle project was done here earlier in the summer, also as part of this new outdoor classroom. It is the 'chalkboard' for the classroom - protected by small roof, locked protective plywood doors, and sturdy support structure.

I'm excited to see the new classroom in use this year. If you know of some Eagle candidates looking for projects, these outdoor classrooms are being set up in lots of schools now - might want to check locally. Or, I have many other ideas for Eagle Scout service projects.
Posted: 21:48 09-27-2016 1306
Ducttape and Paperclips Making things from old junk stretches the imagination of a boy and gives him freedom to invent, explore, and learn. I had access to lots of old equipment, building supplies, and junk while growing up on USFS ranger stations. I made some awesome things, from forts to kites to bombs - even electric motors.

I believe my time spent watching MacGyver on TV helped, too. On that show, MacGyver could make anything with some ducttape, a couple paperclips, and no more than 10 minutes of effort. That's why I'm excited to hear a new version of the show is about to launch and BSA is holding a contest about it.

Some scout is going to win a trip to the MacGyver set in Atlanta. Ten others will win some backpack full of swag. But, every scout that enters will get a patch - not just a patch, but a collector's edition patch! OK, maybe you don't need YAP (Yet Another Patch) but, then again, maybe you do.

Anyway, a tip for 13+ year old scouts - when you enter the sweepstakes, choose the 13-17 age range to enter your postal address. If you're just 12, your parents need to get involved. I don't know why it's not open to younger scouts, but it's probably some legal internet child protection stuff.

Now, I just need to find 3 more paperclips and I'll get that hang glider finished!
Posted: 16:26 09-21-2016 1305
Dutch Oven Results
Hey, thanks to the folks that took a chance at guessing which state has ordered the most copies of my signed dutch oven cookbook. A winner has been chosen!

I know I said that figuring out the books per capita would be too much work, but I was wrong. I did figure that out, and the results were interesting.

First, here's a map I made of orders from every state. As you can see, the top states are:
and the states with no orders are:

So, with that information, the winner was the only person that submitted a guess of California, and that was Benjamin W. - good job! I'll ship him his free cookbook as soon as he replies to my email. I'm pretty sure Benjamin went with the odds of California having the highest population, and that worked for him.
Four people guessed Utah which actually has the Dutch Oven as their official legislature-approved State Cooking Pot - imagine that! But, three people guessed Texas which has the Dutch Oven as their official State Cooking Implement - pretty much the same thing. (I never even knew states had official cooking items!) And, one person each guessed Hawaii and Rhode Island as having no orders.

I found it interesting to compare the raw numbers against the per capita numbers - that is, how many cookbook orders per million residents. I used the most recent census information online and came up with this:


If we used the Per Capita rating, the top states would be: Utah, Wisconsin, and Oregon, with California and Texas way down at 9 and 10.

So, from this detailed and scientific study (not), Utah really seems to be the Dutch Oven State. Being the curious type, I'll probably keep tracking cookbooks and post again in 6 months or a year. You can help your state rise in the standings. :-)
Posted: 20:24 09-11-2016 1304
Dutch Oven Guess 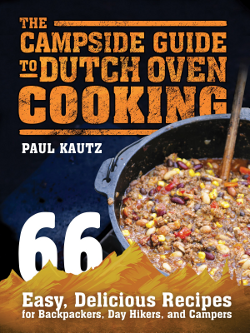 Do you cook with dutch ovens? Which state has the highest dutch oven usage for cooking? Do scouts in Alabama use dutch ovens more than scouts in Wyoming?

I've sent out 200 orders of my signed dutch oven cookbook this year, so I thought it would be fun to map the orders to states. This would give an idea of where dutch ovens are most popular. It would be too much work to figure out the orders per capita, so I'm just tracking the raw number of orders per state.

Before I post the map that shows which states are highest, and which states have no orders at all, I decided to give you all a chance to take a guess. I'll send a free signed copy of my cookbook to one person.