Winter Good Turns
Now that the boys are older, Christmas morning doesn't come so fast around here so I'm just waiting for people to wake up while I check the weather. The big news around here is the snow and we're supposed to be visiting relatives soon, so I want to travel at the safest time. It looks like we're going to get lucky and have an open window.

Snow and winter weather provides great opportunity for scouts to do some good turns over their holiday break from school. Our troop doesn't meet as a troop over break, but I encourage the patrols to get together on their own for something fun and/or service-oriented.

Individual scouts can easily see if driveways and sidewalks of their neighbors have been cleared. If not, they can offer to do it. Maybe their dad or little brother can be their buddy and help out too.

Scouts should know if they have elderly neighbors. If they do any door-to-door fundraising, or just through exploring their neighborhood, they should remember who lives where. Offering to pick up mail, take garbage cans to the curb, take a pet for a walk, or help with other errands can be a big help in slippery conditions.

Fire hydrants should be kept clear of snow. Many people don't realize this responsibility. A great service project for a patrol is to canvas a neighborhood, clearing fire hydrants after asking the homeowner for permission.
The same is true for groups of mailboxes and entries to sidewalks - it helps to have the snow cleared away, but people often forget.

Snow provides many opportunities to help others. A scout providing assistance without pay or reward is being helpful and kind, and hopefully also cheerful since it's such fun getting out in the snow!

Scout On - and here's a happy, safe, and restful holiday to you
Posted: 8:02 12-25-2009 473
Cub Scouts 2010
Cub Scouts 2010 - if you're a Cub Scout leader, you really should check this out. It is a new step in the evolution of the Cub Scouting program that's been tested the last few years, resulting in huge increases in retention of scouts.

It's still early, but Cubmasters and den leaders should start planning on how their pack will implement this new program for the 2010-2011 school year.

Have you ever had or heard similar questions? Well, BSA has posted an email address where you can start the process of creating a new merit badge.

When you have an idea for a new merit badge, the first step is to complete a proposal form, which you can get by e-mailing merit.badge@scouting.org

Proposals that fit merit-badge criteria and rank highly with youth members are sent to a volunteer task force and the Program Content Committee for review and development.

Scout On
Posted: 8:58 12-12-2009 471
Losing Philmont Ticket
Our lottery submission for a 2011 Philmont trek wasn't a winner. :-( Got a rejection email yesterday, saying we're on the waitlist, so it's a gloomy day. We had two crews worth of people ready to go. I hope some of you had better luck - let me know.

Now, our options are:

I sure hope the opening of The Summit in WV has a significant effect on availability of treks in the coming years. 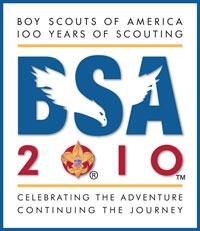 Tune in tonight to audiocast.scouting.org and listen to the 100th anniversary Kick-off Rally at:

But, don't worry about winning the trip to DC for the big black-tie affair - I've already got dibs on that one. And, as soon as they announce my name, I'm buying my 100th Anniversary bow tie and cummerbund

Scout Camp the movie - from the trailer and videos looks like an interesing comedy about Boy Scout summer camp - another angle on the usual "underdog group vs. popular group" theme.

There's a music video on YouTube with scenes from the show. They've made high use of actual BSA uniforms. I love the fire starting scene - has never happened in our troop. :-) :-) :-)

Trailer, Swim Test, Pledge of Allegiance, Rifle Range
Gee, I guess you don't really even need to see the movie - it's all on YouTube. :-)

I just figured our troop's percentage from data in Troopmaster and it looks like almost 40% of all scouts that joined from 2002-2005 will make it to Eagle. I imagine that just that number will cause some readers to say "eagle factory". But, it would be interesting to hear from you what characteristics an eagle factory troop has.

Here are a couple descriptions I could find: 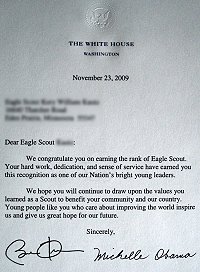 
Enter on BoyScoutTrail.com for the December give-aways.

The BSA PR folks asked me to spread the word about this, so here you go...

Clear your calendar for Dec. 10.
That evening youll want to cozy up to your computer for the National 100th Anniversary Kick-Off Rally.

If you arent already pumped up for 2010s yearlong celebration of Scouting, this 30-minute live audiocast is guaranteed to get your heart racing. Tune in by visiting this page and RSVP. Then use that same link to listen to the event on Dec. 10 at:

Chief Scout Executive Bob Mazzuca anticipates that 250,000 volunteers, staff members, Scouting alumni, and parents will listen in from across the United States and around the world.

An impressive lineup of guests will join Mazzuca, including BSA National President John Gottschalk, National Commissioner Tico Perez, and AT&T Chairman, President, and CEO Randall Stephenson, the BSAs 100th Anniversary Chairman. And after starting the celebration, theyll all take questions from you and other volunteers.

Submit your questions in advance when you RSVP at the link above.

If youre looking for a way to pass the time between now and the Kick-Off Rally, check out the 100th Anniversary programs already under way. Click here to see the entire list.

Then, on Dec. 10, switch on your computer and catch some of the energy and excitement at the official opening ceremony of the BSAs yearlong birthday celebration.


The Adventure Base 100 might be coming to your area, so check it's schedule and plan to have your scouts visit.

The Shining Light Across America sounds like it's going to be a huge deal on July 31 - you might want to get your scouts to start planning something for that day.

If he hadn't been volunteering with Scouts, he wouldn't have been there to win. If you were returning from a campout, or heading to a Scout meeting, or some such activity with scouting and happened to win $25K, what would you do? Would you consider donating it to the BSA? splitting it? or is it just rewards for all you do? The land is purchased, development funding is ready, and the plans are started for The Summit - the official name for the new national BSA site on the New River Gorge in West Virginia. Pretty exciting times for the BSA. Development should start next year and the site be ready in three years.

Looks like there will be a half dozen regional camps, a huge outdoor arena, a mountain bike course, Order of the Arrow camp, and three lakes. It's going to be an amazing place, kind of a khaki Disneyland.

If you'd like to better see what the Summit will look like, here's a larger JPG or a highly detailed 7.8MB PDF file.