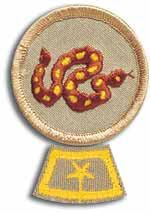 The National Honor Patrol Award is given to patrols whose members make an extra effort to have the best patrol possible. Your patrol can earn the award by doing the following over a period of three months.

Your patrol may earn multiple award patches by meeting the requirements in additional 3 month time periods.

Each unit leader determines if a patrol qualifies for the National Honor Patrol Award. The patch is an embroidered gold star (BSA No. 00367) worn around the patrol emblem and purchased at Scout shops or council service centers.

Patrol leaders may use this NHP award tracking sheet to record their efforts. Unit leader uses this form to apply for the award.

Can you have more than one gold star circling the patrol patch?

@matt - Yes, as it states above... Your patrol may earn multiple award patches by meeting the requirements in additional 3 month time periods.

Chase Morgan was two steps from Eagle Scout and was kill in a car accident.  He was a good boy and should be given the Eagle Scout award posthumous.  Thank you

@John - There is a Spirit of the Eagle recognition for just such a situation.
Section 5.0.6.0 of the Guide to Advancement states that a rank or award can be awarded posthumously if all requirements but the board of review had been met.