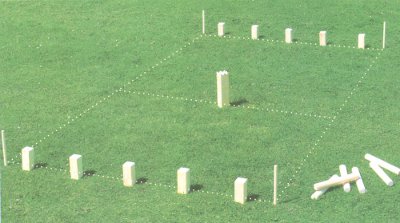 Required:
a Kubb set or,
16 feet of branches and a saw
Instructions:
A very simple outdoor game that can be played anywhere with the goal of throwing sticks to knock over blocks.

Kubb is played between two teams of 1 to 6 people.

where the red circles are six stakes marking the end and center lines, the purple square is the King, the yellow squares are one team's base kubbs, and the blue squares are the other team's.

One team throws six wooden batons at their opponent's base kubbs. Then, all knocked over kubbs are tossed by the defender to the attacker's side of the field. There, they are set upright and called 'field kubbs'.
The second team is now the attacker and tries to knock down all the opponent's field kubbs first, then their base kubbs.
This continues until one team has knocked down all their opponents kubbs. That team then tries to knock down the King to win the game.

There are National and World Kub tournaments and it continues to grow in popularity. You can read the USA Rules or World Rules.

To make your own kubb set, you need:
See How To Steps.

There's no reason you can't just gather and cut some sticks and branches and play this game in the wild.
There are also many rule variations which help to shorten the games or make play more even between pros and newbs.