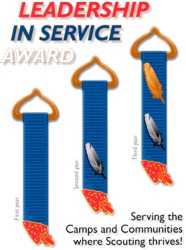 In recognition of the Order of the Arrow's heritage of service, the National Order of the Arrow Committee created a new three-year Leadership in Service Program which was announced at the 2004 NOAC. The Order strives to strengthen Scouting's foundation of service by further fostering in Arrowmen the ethic of servant leadership. By promoting and rewarding service that benefits the Boy Scouts of America's outdoor program, and the communities in which Scouts reside, the Order will be acting to support Scouting at the most important level.

Requirements:
Arrowmen must complete the following requirements each year in which they earn the award:


*Working as camp staff does not fulfill the council service requirement.
**Lodges are encouraged to use the OA's Lodge Community Service Guide to aid them in planning community service projects.


The timeline for the Leadership in Service Award is a graduated system that encourages Arrowmen to continue their service from year to year. Requirements for the award can be met during the calendar years of 2005, 2006, and 2007. Service from a previous year cannot be carried over to meet the next year's requirements. Arrowmen of all ages may earn the First Year award in 2005, 2006 or 2007, the Second Year in 2006 or 2007, and the Third Year Award in 2007 only.

Signatures for the requirements of this award may be signed off by the Arrowman's Scoutmaster, Lodge Chief and Lodge Advisers. Arrowmen should contact their lodge to obtain sign-off forms. Completed forms should be returned to the lodge. The awards will be presented by the lodge at an appropriate occasion.

A Leadership In Service Award Sign-Off Form is available for Arrowmen to use to report the completion of this award to their lodge.

Ordering the Award
Lodges will receive an order form in their Lodge Program Support Pak after they recharter.
The award for first time recipients (ribbon) costs $5.00. The awards for second and third time recipients (silver and bronze feathers) cost $2.00.

Lodges have until March 1 of the next year to submit their award orders.