This Award is meant for Cub Scouts, Scouts BSA.

Cub Scouts and Boy Scouts may earn the Recruiter Strip by recruiting other youth to join scouts.

The strip is worn centered directly below the right pocket on the uniform.

There are no formal requirements for these strips. Each Council establishes the procedure for awarding the strip, so please check with your local council office or unit leader.

Usually, a Recruiter Strip is awarded to a Cub Scout or Boy Scout the first time the scout recruits a friend, relative, classmate, or other acquaintance to join.

Normally, one strip can be awarded to a scout while a Cub Scout and another while the scout is a Boy Scout if the scout recruits at both levels. 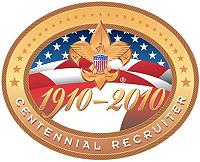 The national BSA and local Councils tend to have special recruiting drives for which collector recruiter patches are made available. For example, in 2007, the Centennial Recruiter program was held at the national level with this patch available to scouts that recruit another youth to join. This patch in addition to the recruiter strip is awarded since these kinds of patches are considered temporary patches.

Here are a couple more recruiter patches that have been available to scouts...

I see that Cub Scouts, Boy Scouts, and Varsity Scouts can wear the recruiter patch. What about scout leaders, and venturers?

@Jessika - On page 66 of the 2012 Guide to Awards and Insignia, it says the Recruiter strip is for "youth member".  So, officially, any youth BSA member could display it, but not adult volunteers.

If I earned the recruiter strip as a Cub Scout, can I use the patch in my Boy Scout uniform?

@Rotsen, there are no set requirements as stated above. Also that it is earned again in each family of Scouting.

So you can use the same patch but would need to help recruit another boy to your troop to wear it on your uniform.

I've seen before that you have to recruit 3 boys. Is this true? If not, can I just go to one of my friends and tell him about scouts, so when he joins I get the award?

@Hunter - Please read the page content above, especially "There are no formal requirements for these strips. Each Council establishes the procedure for awarding the strip, so please check with your local council office or unit leader."

I am sewing on patches.  This little second grader has completed so many activities.  There are three rows around the pocket already and has just received his recruiter patch. Where should this one go?

@Karen - Please read the content above, especially "The strip is worn centered directly below the right pocket on the uniform".

I don't know what sort of patches you are sewing on the uniform, but "three rows around the pocket" sounds like you are not following the official BSA Uniform Inspection sheet directions.

I am so sorry, I didn't make that very clear. The patches I am sewing on are the small ones that go in a circle around the district circle that identifies which district you belong to.   Then the little activity patches \\_____/ are sewn around.  I have sewn these for years.  I have just not had a 2nd grader with so many patches for parades, pinewood, $$$, ?, teepees, eagle, handshake, hiking boots, OMSI, NASA, Red Stars, Leave no Trace, Wreath, Regatta, fireworks, rockets, and on and on.   These patches are properly placed.  He however, just received his Recruiter patch.
My question is.. do I sew it centered directly below the right pocket on the uniform..under all the activity patches.

Thank you so much for all your help.

@Karen - I'll still say it sounds like the BSA insignia guidelines are not being followed.  The Recruiter Strip is worn centered directly below the right pocket.  If you've filled that area with other patches, then those other patches are taking up too much space.
See Insignia guide page 11 where it says this about temporary patches on the right pocket: "The patch is worn centered on the right pocket and must neither exceed the dimension of the seams of the pocket nor extend higher than the lowest tip of the pocket flap"
If your council or district is doing things differently, then you'll need to ask them how they want you to address the Recruiter Strip.

@Iris - Since you are not sure where to put the Recruiter Strip, even after I told and showed what the National BSA documentation says to do, then asking the people that have authorized the deviation from the published BSA guidelines seems like your next step.  I would like to hear what they say to do about the situation when you contact them - it might be helpful to others in the same boat.

I had a question on this patch as well. I've seen several adult leaders throughout our council and others wearing this strip. What thoughts do you all have on this? It seems to me like this would be a solid idea during round ups but I'm not sure I'd want to have one on my uniform all the time.

@Mike - This is a "youth" award.  It is not for adults, according to official BSA documentation.  So, my thought on adults wearing the patch is that they are demonstrating incorrect uniforming to the youth.
A BSA volunteer that is not implicitly recruiting whenever s/he is in uniform is missing the reason they're in a uniform.

@ScouterPaul - Thank you for your answer. I felt the same way but wasn't sure if I was just being overbearing or not lol. As a Scout (from the 80's and 90's) and now a Pack Committee member I like to do thing as by the books as I can with a little personal flare, but sometimes I feel like other leaders or committee members think I'm just being too by the book.

I have a cub that recruited a friend into the pack. The friend registered and everything but only came to 1 or 2 meetings then decided to quit. Does that cub who recruited him still qualify to receive the recruiter strip? I know there's no hard and set rules but I'd like some opinions :)

@Stephanie - The scout did the work of recruiting another boy, and he has no control over how far that other scout progresses, so he should be recognized for his efforts.

If my Boy Scout earned the recruiter patch as a Cub Scout, can he wear it on his Boy Scout uniform?

@Patricia - Since there are no formal requirements for this item, it is up to the scout.  He should check with his SPL or Scoutmaster to find out what his troop policy is.