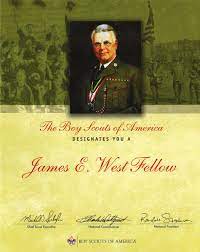 This Award is meant for All scouts, Venturer scouts.

James E. West served as the first Chief Scout Executive of the Boy Scouts of America for over 30 years.
The West Fellowship award is available for gifts of $1,000 or more to a council endowment fund. The gift must be in addition to - and not replace or diminish - the donor's annual Friends of Scouting support.

The James E. West Fellowship Award is an 8-by-10-inch certificate, personalized with the donor's name, date of gift, and council name.
In addition, there will be a distinctive lapel pin/charm and an embroidered square knot for uniform wear. While it is a national recognition, the James E. West Fellowship award is authorized and presented by the local council.
A registered BSA member of any age can receive this recognition.

There are four levels of giving available:

Gifts can be given in installments over time and accumulate to reach higher levels.

What a gift this would be to a council that has given me so much. I am 15 years old and an Eagle scout, my family and I have been big on Scouting and promoting what it gives not only to the Scout and parents, but the community. Membership is down in my district, but we are trying to make it better bye giving back to the community as much as possible. In a few month I am planning a conservation project, beyond what I did for Eagle, to give back just a little more, love of charity for our Community will make a difference, Thanks!

I'm donating 15 Computers to my Local Council. Computers will setup in a classroom and to be used at Summer Camp for a variety of Merit Badges. Net worth of the computers is $15,000. Do this qualify donor to receive the James E. West Diamond Award?

@150BSA. First of all, thank you for your wonderful donation! Second, I do not believe so. The James E. West Fellowship (not award) is for $1000 plus to a council ENDOWMENT fund, which is a council permanent fund that keeps its initial investments and skims off the interest annually to keep the programs running without a loss of capital.  The two higher levels are for $25,000 donation or $100,000 WILLED to the council after a scouter's death.  There is no 'diamond' level.  The other two are called the Founder's Circle and the 1910 Society.

Is it $1000 or more annually or one time gift that qualifies?

Can the youth scouter earn this if a parent donate the required amount into the endowment fund?

@Dennis - Yes.  There is no stipulation that the award recipient need be an adult.

Can a couple of people combine their donations to qualify for the award?  We have a scout that just passed from this world and would like to make a donation in his memory to the endowment fund.  Please advise.

@ Paul.  Any number of people can combine money, but any given $1000 donation to the endowment can only have 1 name attached to it.  One district in my council passes around the hat every month...dollars, a 20, pocket change, and once it hits $1000 we "elect" a recipient and start over.  Sometimes we get 3 or 4 in a year, sometimes it takes 2 years to get one.  Good luck.

@Roger - The BSA does not want people reallocating their normal contribution to this award.  So, if you normally contribute $200 to FOS, then continue doing that.

If you donate $1000 do you get certificate , pin and knot award