This Award is meant for Boy Scouts. 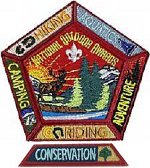 The six National Outdoor Badges recognize a Scout, Sea Scout, or Venturer who demonstrates both knowledge and experience in camping, hiking, aquatics, riding, conservation, and adventure. Scouts earning the National Outdoor Badges have demonstrated that they are knowledgeable, safe, and comfortable in the outdoor activity covered by the badge. Outdoor activities completed as part of any BSA program (Cub Scouting, Scouts BSA, Sea Scouting, Venturing, or Exploring) may be used to satisfy the requirements of the National Outdoor Awards so long as conducted as part of an approved unit, district, or council program. This is referred to as "under the auspices and standards of the Boy Scouts of America" in the requirements.

When the first badge is earned, the scout receives the center patch and earned segment. Additional segments are added as the badges are earned.

The patch scheme is considered a temporary patch, so it can be displayed centered on the right pocket, or on a jacket, blanket, or other patch display.

National Outdoor Badges may be earned in the following areas:

Camping: A Scout, Sea Scout, or Venturer earns the National Outdoor Badge for Camping by completing these requirements:

The unit leader completes the National Outdoor Badges application and submits it to the local council service center.

Share
Tweet
Comments:
Jul 21, 2015 - Chris Musial
Question: I haven't found any explicit age requirements for these awards. My son has been dual registered in Boy Scouts and Ventures for several years;  he turns 18 in October.  Will be still be able to work on these awards as a Venture once he turns 18?
Jul 21, 2015 - Scouter Paul
@Chris - Yes, he can earn them as a Venturer until he turns 21.
Aug 04, 2015 - Emke Groenewald
Question:  For the riding award, we use the Cycling MB (150 miles) but it also asks for an extra 100 miles under #2a.  Would that be extra on top of the Cycling MB's 150 miles?  If you look at #3 it asks for 200 miles including #2a.  But if the 100 miles is extra, then 2a is already at 250 miles.  A bit confusing.
Aug 04, 2015 - Scouter Paul
@Emke - Yes, the 100 miles is in addition to those required by the cycling merit badge.  The requirement here says to earn the merit badge AND 100 miles.
Requirement #3 says that the 200 miles total includes the 100 miles in the previous requirement.  That is consistent with the following text about another device being earned for each additional 100 miles.
Aug 19, 2015 - Randi
If someone earns the camping outdoor award on 1/10/15, do the nights camping start from there?  My son earned the next 25 nights before he earned the camping outdoor award, do they still count?   Thanks!
Aug 21, 2015 - Zachary
The requirement for the Camping says to include at least one week long camp, can I use more then one? Thanks.
Aug 21, 2015 - Terry
For the camping award, if a boy works at a summer camp, do those nights count as camping nights?  I would think so (since summer camp nights count when they are campers) but wanted to make sure.
Aug 22, 2015 - Scout mom
Do the additional miles need to be at Boy Scout Activities or can they be at other activities?
Aug 24, 2015 - Scouter Joe
@Randi Personally I would count them. Though use your best judgement.

@Zachary Yes! This awards is not written as the Camping Merit Badge

@Terry I would count them, as long as it was in a tent.. which most are, I'm not sure I could count nights spent in a cabin ha ha!

@Scout Mom They can be done at other activities. Though I would advised keeping a well documented journal of all miles obtained.
Nov 06, 2015 - Sherrie Nielsen
How does a female in a Venturing Crew earn the Camping Merit Badge for the Camping Award?
Nov 17, 2015 - Quickest1Mar 01, 2016 - Ralph
How are miles calculated for the skating portion of the riding outdoor badge?  My son is a competitive figure skater and skates now 5 - 8 hours / week.  IS it a simple calculation of the rink's diameter x the number of times around?
Mar 01, 2016 - Scouter Paul
@Ralph - Figure skaters don't just do laps, so it seems it would be pretty difficult to determine the miles skated when skating various figures all around a rink for a few hours.  I guess it would need to be estimated.
Please review this page, especially Eric Hiser's comments since his is the BSA National view.
Your son's competitive practice and performance skating should not count for this BSA award because it is not a scouting activity and is not focused on earning this award.
Mar 31, 2016 - Eileen
I believe that the Riding requirement for 2a is incorrectly written. The cycling merit badge requires 150 miles, while the Ranger riding elective requires 210 miles for biking or 120 miles for mountain biking.
Scouter Paul, replying to Emke above, is only counting the 100 miles portion of 2a and NOT counting those required to earn the merit badge or elective.
To be consistent with the other segments, I don't think the additional 100 miles of 2a should be listed. I agree with Emke - Requirement #3 would be redundant if 2a really requires this extra 100 miles. If it is not included, then Requirement #3 makes sense to bring the total miles to 200.
Who do I contact at BSA to report/clarify this?

May 20, 2016 - Deaf Scouter
Eileen.
Try Bryan Wendell at Bryan on Scouting for Tuesday Talks.  Bryan asks National Council experts to clarify these kinds of questions.
Jun 19, 2016 - rick scouter
can you use stuff like raking leaves at a state park and cleaning up ab oat lunch for towards 25 hours of conservation
Jun 20, 2016 - Scouter Paul
@rick - Raking leafs doesn't strike me as conservation work.  If the area around your boat launch has become a garbage dump and the scouts do a significant clean-up to make the location more usable, then that sounds like conservation work.
Oct 21, 2016 - NHMom
What "programs" fulfill the requirements of part 3g of the Adventure badge?  Do High-adventure programs like challenge events and shotgun shell reloading and shooting offered at Philmont count individually?  Or do all of those backcountry programs (except climbing/rappelling) that cannot be offered on a normal camp out really get lumped into only one credit?
Oct 21, 2016 - Scouter Paul
@NHMom - Comparing 3g to 3a-f, each trek would count as 1 activity.
The explanatory paragraph at the end allows unit leaders to double dip (or more) if they want.  A trek at Philmont where the scout backpacks, rock climbs, and earns his 50 Miler, could conceivably be counted for 3a, d, f, and g.
Mar 07, 2017 - Tim
Requirement #4 in Aquatics reads "Earn at least one of the following: Canoeing, Fishing, Fly Fishing, Kayaking, Rowing, Scuba Diving, Small Boat Sailing, Water Sports, or Whitewater merit badges, or Ranger Award Fishing, Scuba or Watercraft electives. Complete at least 25 hours of on-the-water time, applying the skills that you learned in the merit badge or Ranger elective."

My question is does the 25 hours apply to each merit badge or can a boy earn a couple of the merit badges and their combined hours equal 25 hours..?

A boy in our Troop has earned the Canoeing, Fishing and Kayaking merit badges and has a total of 35+ hours on-the-water. The Advancement Chair states that he needs 25 hours in Canoeing, or 25 in Fishing or 25 in Kayaking.
Mar 07, 2017 - Scouter Paul
@Tim - Since another device can be earned for each additional 25 hours of accumulated aquatic activity, I'd say that initial 25 hours should also be accumulative, not a specific activity.  Req #5 says 50 hours of any combination, so that second part of Req #4 seems redundant.
By the way, it's not really the advancement chair's job to decide who earns what - s/he should make sure things are tracked, turned in, and recognized.
May 10, 2017 - NHmom
Would NYLT or Wilderness First Aid training count as a "specialty-adventure program" for requirement 3g of the Adventure badge?
May 10, 2017 - Scouter Paul
@NHmom - No, those are training programs.
Jun 08, 2017 - Eva
Presuming the device has been earned in one or more areas and the Scouter is now tracking hours / miles for a gold or silver device, do these hours / miles need to be done "under the auspices of Scouting..."?  In other words, can a Scouter who has already completed the merit badges and hours requirement for Aquatics use hours outside of Scouting to earn a gold device.?
Jun 08, 2017 - Scouter Paul
@Eva - No, the requirement specifics do not change for working on a gold device.
Oct 02, 2018 - Stephen
When a scout reaches 125 camping nights, does he receive a gold device and a silver device, or just a silver device?
Oct 02, 2018 - Scouter Paul
@Stephen - The scout would get a patch for the first 25, then a gold at 50, a gold at 75, a gold at 100, then a silver at 125.   Giving both a silver and a gold at 125 would just cost $$$.

Trying to be thrifty, for even higher counts, I would ask the scout to just wear their current devices rather than purchasing redundant golds that would not actually be worn.  For example, the silver and 3 golds already owned to show 200.

If the scout really wanted to, 4 gold devices could be worn to signify the 125, according to the statement in the requirements - "Scout may wear any combination of devices totaling the current number".
Nov 14, 2018 - Christie
Are female Venturers able to earn the NOAs for camping and conservation? My question comes from two points. First, all of the other NOA badges have requirements to EITHER complete MB requirements OR Venturing ranger requirements. Camping and Conservation are the only two that only list MBs for completing the award. Point two, boy scouts âearnâ MBs just like they âearnâ their ranks. But the requirements for each NOA badges simply say âcomplete the requirementsâ for XX merit badge. Does this mean a female Venturer who cannot earn a MB can still earn by NOA by âcompleting the requirementsâ for the specified MBs?
Nov 14, 2018 - Scouter Paul
@Christie - Yes! to both your questions.