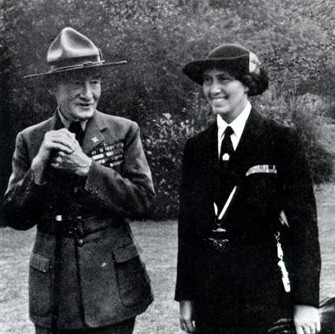 Little Bobbie was born on February 22, 1857 and would grow up to eventually start the Scouting movement that has encompassed the globe, so today is celebrated as Scouts' Day, Founders' Day, and Guides' Day.

It is called Founders' Day instead of Founder's Day because Robert founded Scouting for boys and girls with his sister, Agnes.

Today is also the birthday of the girl who would grow up to marry Robert and be an integral part of early scouting, Olave St. Clair Baden-Powell. They met in 1912, on the RMSP Arcadian while sailing through the Caribbean to New York. They got married the day before Halloween that same year - quite a whirlwind romance, huh? He was 56 and she was 24 when they married.

Scout-Guide Week is celebrated right now in Canada. It is the week on which February 22 falls.

And, it's World Thinking Day also - a day for scouts to think about and appreciate all their scouting sisters and brothers around the world.

One more thing - if your children are grown and you think you're too old for any more Scouting, consider that Lord Baden-Powell did all of his work with boy and girl Scouts after he turned 50 years old.