This Award is meant for Bear scouts, Webelos scouts. 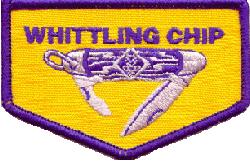 Bear scouts and Webelos scouts may earn the privilege of carrying a pocketknife to Cub Scout functions. The objective of this award is to make scouts aware that:

'A Cub Scout knife is an important tool. You can do many things with its blades. The cutting blade is the one you will use most of the time. With it you can make shavings and chips and carve all kinds of things.

You must be very careful when you whittle or carve. Take good care of your knife. Always remember that a knife is a tool, not a toy. Use it with care so that you don't hurt yourself or ruin what you are carving.'

The Scout must show the Scout leader, or someone designated by the leader, that the scout understands the responsibility to do the following:

The scout should sign and carry the Whittling Chip card whenever carrying a pocketknife.

The Official BSA Whittling Chip for Cub Scouts and Webelos Scouts is a Wallet Card (No. 34223A) and/or Patch (08598).
According to the BSA here and here, the patch is considered a 'temporary' patch and should only be displayed on the uniform sewn centered on the right pocket, or hung in a temporary patch holder from the pocket button. It does NOT get permanently sewn on a pocket flap even though it is shaped that way. Unfortunately, the BSA also says the patch is not for uniform wear here. You may want to check with your BSA council for local guidelines.

Use this Whittling Chip Certification form to track a scout's progress. 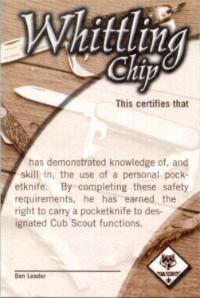 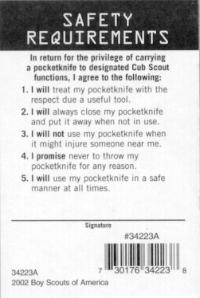 if they earned this as a Bear do they need to go through and do it a 2nd time ?
Aug 15, 2015 - Scouter Paul
@Brian - The scout does not need to re-earn the Whittlin' Chip, but he does need to demonstrate his knife skills and knowledge.   If he seems to have forgotten much since earning his Whittlin' Chip, then a thorough review would be valuable, but if he's still sharp, then he's done with the requirement.
Sep 26, 2015 - Marleen Holladay
I am Cubmaster for a Pack in Louisiana.  We have not had any problems or injuries with our 3rd grade Bears in learning, using or safety with knife use!!! I have been fortunate to have had excellent leader training myself along with Den Leaders.  I also have had the very excellent help from some experienced Den Chiefs as well as some very supportive parents who take this very seriously.  I had one parent who bought their child a very nice expensive knife.  It was a real beauty but was not an appropriate fit for the child's hand and the child had difficulty using it safely, opening closing turning in his hand etc. When I showed this and explained this to the parent, he immediate took the child out and got a new one.  We took our time training and working on these skills.  Our Pack camps, hunts, fish and hikes a lot.  We are very outdoor active.The 3rd grade boys must give their knife to parents.  They must check in and out with it and put in scout lock frame on arrival to scout function.
Oct 06, 2015 - Jason Jansen
Love this page... Thank you for your dedication... I'm a webelos 1 leader... Boys have all earned whittling chips as bears and have had quite a few opportunities to use their knives.... Can they earn totin chips now? Right now I'm carrying all of their knives and we break them out as needed but they're demonstrating safe practice at this age...
Oct 06, 2015 - Scouter Paul
@Jason - No, the Totin' Chip is for Boy Scouts.
The whole idea of the Whittling Chip is that the scout can carry his own pocketknife, as it states right on the card.
Oct 15, 2015 - Moriah Copeland
I was told that there were changes in the policies regarding the loss of the whittling chip. I was originally taught that each act of negligence would result in a corner being cut off then when all four are lost the scout must redo the course to earn it back. I was told that they now loose it on one act of negligence.

Have you heard anything on this?

Thank you for your time.
Oct 18, 2015 - Scouter Paul
@Moriah - There is no national BSA policy on cutting off corners or not.  It's up to individual Packs to decide how they'd like to handle the revoking of pocketknife rights and retraining to regain them.
Nov 04, 2015 - Kenny That
I am a 21 year old Webelos den leader, I don't have any kids myself I joined for my younger brother. I think it is said people don't give 9-11 year olds the opportunity, respect and trust to actually learn how to use a pocket knife and then get the opportunity to use it. As a bear my den was able to actually carve the soap and that's what I do with my den... I'm still alive!!! The trick is for the leader to be confident and know how to properly field parent questions. In the unlikely event someone "nicks" themselves it'll give the scouts a chance to practice some first aid.
Nov 05, 2015 - Scouter Joe
@Kenny I totally agree with you! Though I would start off slow with plastic knifes to gauge your group then move to pocket knifes, and then move to some soft wood!

I had a carving contest for my boys and best one/most creative won a new pocket knife. Boys loved it and had a blast doing it.
Jan 06, 2016 - Pack 253 Bob
I run three sessions (den meetings) for bear scouts each year to help them earn their whittling chip.  In the 1st session, we make folding knives out of popsicle sticks and use those to learn sharpening and soap carving.  Then we do actual whittling on the last meeting with real knives.

www.instructables.com/id/How-To-Make-A-Popsicle- Swiss-Knife/
Jan 18, 2016 - Gay Ellard
Tomorrow night, January 19th, I will be teaching my 1000th Cub Scout the Whittling Chip class. I've had a couple of parents cut themselves showing off, but not one Cub has broken skin. I have always pushed having them make thin curls from the edge of a bar of Ivory soap. This teaches control of the blade angle and proper pressure exerted to make the tightly rolled curls; this in turn teaches them how to cut kindling for learning to start fires as a Webelo, and further on in Scouting. Animal carvings, etc. are left to be done at home.
Jan 19, 2016 - BryanSep 19, 2016 - Bear scout leader
Our bear scouts just completed the whittling lesson. We had no incidents with each kid having a parent by there side.  Some carved a bear, a bird, or a turtle.
Sep 25, 2016 - Kendall G.
I was wondering if this activity could be used for the girl scouts. I am an active member and will be leading a meeting soon, so I need to know if this would be okay.
Thanks, Kendall G.
Sep 26, 2016 - Scouter Paul
@Kendall - You'd have to check with GSUSA guidelines to find out what is allowed in the GSUSA.
Nov 09, 2016 - TAMMY BURKETT
My son earned his Whittling Chip as a Bear does he need to do it again as a Webelo?
Nov 09, 2016 - Scouter Paul
@Tammy - No, he keeps the card until he becomes a Boy Scout, where he'll earn the Totin' Chip card.  But, I sure hope his Webelos den reviews, and uses, the guidelines of the Whittlin' Chip often as they are out scouting about.
Apr 21, 2017 - Charles McKinnis
I have taught three years of Whittling Chip now with no injuries. Taught over three weeks.
Week 1 We use plastic (similar to the wood) knives and I put red lipstick on the blade edge. We practice a safety circle, opening and closing, and talk about safety (cut away). I do not tell the kids about the lipstick before. Afterwards we check hands and body parts for red lipstick; this is to demonstrate how they can get cut if they are not paying attention. Someone always has red after playing with the blade. When leaving, I recommend a lockback with a handle that fits across the palm that the boy can open and close easily.

Week 2
Scouts bring a pocket knife but parents start out with it. We ask parents who have cut themselves, then talk about cut first aid. I put theatrical blood in a nitrile glove finger, then a hotdog. I cut the glove and it bleeds, we apply pressure with gauze, and fasten it in place with a bandage. "Don't remove the gauze because that will re-open the cut." We refresh on a safety circle, then learn to sharpen knives with the ceramic rod sharpeners and that dull knives are dangerous.

Week 2 ends with two bars of ivory, a few example patterns, stop cuts and small carve cuts, a reminder to have a safety circle, always cut away (and have them repeat) and a parent reminder to supervise while carving. Remind the parents, this is safety training not art. If the bar comes back as shavings, but no blood, it is successful.

Week 3, Show carvings and Q&A safety review.
Jan 18, 2019 - Chris
Check the Whittlerbob.com website at the top corner of this page! He has wooden knife kits. All of his Woodcarving projects are made from quality basswood. He helps us tremendously with quality carving projects when we teach at National Scout jamboree and while instructing adults at the Philmont training center.
They supply Scout camps around the country. I met Bob at the 2005 Jamboree, we served on Woodcarving Staff together. His neckerchief slide projects set your Scouts up for success. Itâs a joy to help Scouts of all ages discover the pride in craftsmanship. Just this old Eagles opinion, Scouting since 1972 and still having fun.
Mar 04, 2019 - Amanda Cole
Iâm a cubmaster and was told you needed specific training to teach the boys to use a knife and to get their whittling chip - is this true?
Mar 04, 2019 - Jane
@Amanda - No, but there is a pretty good section on how to teach knife safety to Cub Scouts in the current Basic Adult Leader Outdoor Orientation (BALOO) syllabus:

Sep 20, 2019 - Scouter Paul
@Tommy - Yes, that can be confusing.
In Cub Scouts, a scout is identified by the den they are in, rather than their personal rank they've earned as is done in Scouts BSA.
I believe the big difference is that Scouts BSA advancement is completely individual with no dependence on age or grade, but Cub Scouts advancement is tied directly to age and/or grade.  If a scout joins in the 3rd grade (for example) what would we call that participant until they earned their rank?  They wouldn't be a Wolf because they hadn't earned that.  Just calling them 'scout' wouldn't be very helpful.  Calling them a Bear because they are in a Bear den is the convention.